South By Southwest (or SXSW) is an important event for worldwide professionals. The event offers sessions, showcases, exhibitions and a wide arrangement of network opportunities. They prove, when a wide variety of subjects and people come together, the most unexpected discoveries can happen. SXSW Austin is meant for supporting creative people in achieving their goals.

A piece of SXSW history

In 1986 a small group of people started a discussion group about the future of entertainment and media. These gatherings were strictly secret. One of the fundamental opinions of the group was that  local creative- and music communities in Austin were just as talented as the communities in the rest of the world, but they didn't get any exposure outside of Austin. Therefor music was the uniting factor. Inclusion and paying attention to new things were core values. While the most important opinions were formed, it became clear more cities were experiencing these problems. The solution was found in bringing the world to Austin for a close-up! But to bring the world to Austin this had to have added value for the rest of the world as well. They wanted to use a name that didn't limit them in anyway in the future. In October, 1986 the first SXSW was announced. The SXSW group expected a lot of local resistance, but the opposite was the case. Almost everyone wanted to be part of it! The first event took place in March 1987, where about 150 registrants were expected, but 700 people actually attended! As hoped for, Austin's charm won over the visitors and SXSW started to live a life of it's own!

The following 7 years the event kept on growing steadily. In 1994 2 events were added. Since then the event kept on growing and changed in many ways, but the core of the event stayed the same. Offering creative people the opportunity to develop their careers by bring people from all over the world together so they can meet each other, learn and share ideas. For a full report about the SXSW history in Austin go here!

In 2019 the event will be taking place on the 8th until the 17th of march and will be a big hit (just like the previous years)! Watch the video below for an impression of the event:

Off course it is very important to prepare yourself for the event. There is a very extended program that includes several conference speakers, conference sessions, a music festival, a film festival, keynotes, SXSW gaming and much more! Find the full SXSW agenda here.

A popular part of the event is gaming! This part was added in 2006 and is now (with ten thousands of visitors) one of the biggest happenings during the event! SXSW gaming is meant to bring the gaming industry together and offer a (chaotically) fun experience! The unique combination of everything geeky, nerdy and gaming takes place in an environment where creativity can develop.The gaming part exists out of a combination of expositions, esports tournaments, hands-on play, award, panels and more!  Go here to see the full gaming program! 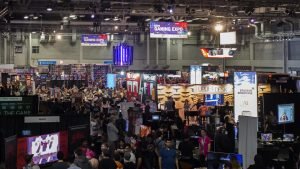 Would you like to experience the event yourself? Order your tickets here! New Dutch Wave offers Dutch startups the possibility to join them at the event.